This notebook takes over from part I, where we explored the iris dataset. This time, we’ll give a visual tour of some of the primary machine learning algorithms used in supervised learning, along with a high-level explanation of the algorithms.

The dataset has four different features which makes it harder to visualize. But from our previous analysis, we could see that the most important features for distinguishing between the different species are petal length and petal width. To make it easier to visualize, we’re going to focus on just those two.

We know from the previous analysis that the labels are balanced, so we don’t need to stratify the data. We’ll just randomly divide up the dataset into testing and training sets using Scikit-learn.

Let’s take a look at our dataset. Since we’re going to visualize a lot of algorithms, we’ll use the mlxtend library and build a simple function to label the graphs. 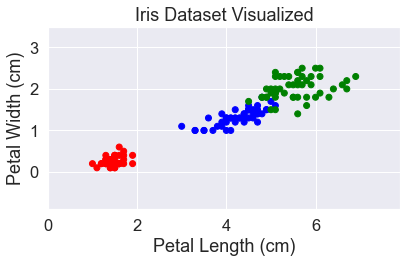 There are lots of good algorithms to try, some will work better with some data. Here are all the ones we’ll look at:

The Gaussian naive Bayes classifier is based on Bayes’ Theorem. Bayes’ Theorem helps us answer an incredibly broad set of questions: “Given what I know, how likely is some event?” It provides the mathematical tools to answer this question by incorporating evidence into a probabilistic prediction. Mathematically, the question “Given B, what is the probability of A?” can be written out in Bayes’ Theorem as follows:

is the probability of A given B, which is what we’re trying to calculate

is the probability of A given B

But what makes the algorithm naive? It is naive because it assumes that the different variables are independent of each other. This is a significant assumption and one that is invalid in many cases, such as predicting the weather. However, this assumption is key to making the calculations tractable. It is what makes it possible to combine many different features into the calculation, so you can ask “What is the probability of A given B, C, and D?” This paper by Scott D. Anderson shows the mathematics behind combining multiple features.

Naive Bayes is a surprisingly capable classifier, as this result shows. 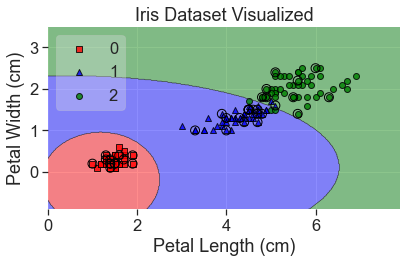 Some good things about Naive Bayes are that it

Some assumption to be aware of are

For logistic regression, and many other machine learning algorithms, we will need to standardize the data first. This allows us to compare variables of different magnitude and keep our gradient descent model optimized.

We do this by making the mean of each variable 0 and the standard deviation 1. We do have to be careful in how we apply this to our training and testing datasets though. We can’t let any information about our test set affect our inputs, and that includes finding the mean and standard deviation of our test set and scaling based on that. So, we’ll have to find the parameters from our train set and use those to scale our test set. This means the mean of the test set won’t be exactly zero, but it should be close enough.

Scikit-learn has a StandardScaler that makes standardizing data easy. 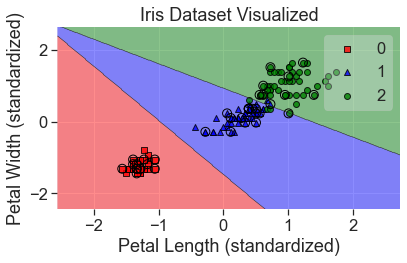 There are many hyperparameters in logistic regression that we can adjust to tune the model. There is a hyperparameter to control the normalization that is used in the penalization. Another that helps with regularization is \(C\), where \(C\) is the inverse of the regularization parameter lambda:

We can use a grid search to find the best hyperparameters and hopefully improve our model.

Let’s see what the best hyperparameters were 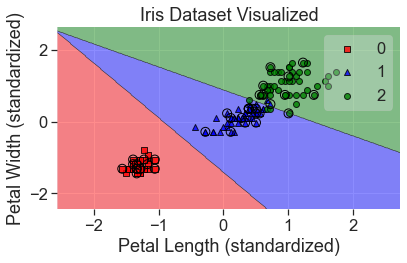 This both scored and looks much better.

Like logistic regression, it assumes the features are Gaussian and uses Bayes’ Theorem to estimate the probability that new data belongs to each class. It does this by finding the mean and variance of each feature and forming a probability of which class the input data best matches. Based on these probabilities, it creates a linear boundaries between the classes. LDA can also do binary classification and is often the better model when there are few examples. 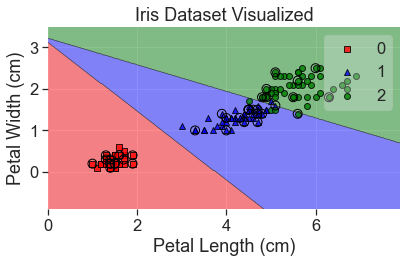 A couple things to note when using LDA:

QDA is very similar to LDA, except that it does not make an assumption about equal covariance. This page from the UC Business Analytics R Programming Guide provides a good background on LDA and QDA. 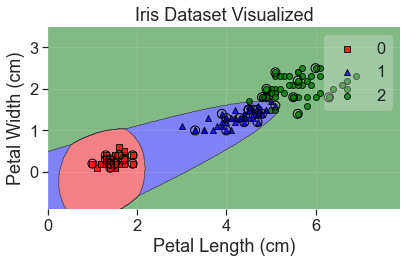 It’s interesting how well this did yet how it would classify a point in the bottom lefthand corner.

Support vector machines (SVM) comes at classification from a different angle that the models we’ve seen before. Instead of directly minimizing the classification errors, we’ll try to maximize the margin between the different sets. The goal of SVM is to find the decision boundary which maximizes the distance between the closest samples (known as the support vectors) of one type on one side and those of another type on the other side of the boundary. In two dimensions that decision boundary will be a line, but in more dimensions it becomes a hyperplane.

Although it might sound simple, SVMs might be one of the most powerful shallow learning algorithms. They can provide really good performance with very minimal tweaking.

Like in logistic regression, we have a \(C\) parameter to control the amount of regularization. Another important hyperparameter is \(\gamma\), which determines whether or not to include point farther away from the decision boundary. The lower the value of \(\gamma\) the more points will be considered. 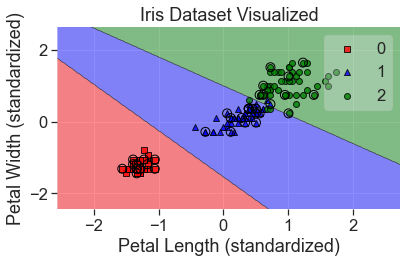 We can adjust the hyperparameters of the SVM to account for outliers (either giving them more or less weight), but in this case, it doesn’t seem necessary.

As you can see, one major limitation of the support vector machine algorithm we used above is that the decision boundaries are all linear. This is a major constraint (as it was with logistic regression and LDA), but there is a trick to get around that.

One of the best aspects of support vector machines is that they can be kernelized to solve nonlinear problems. We can create nonlinear combinations of the features and map them onto higher dimensional space so they are linearly separable. 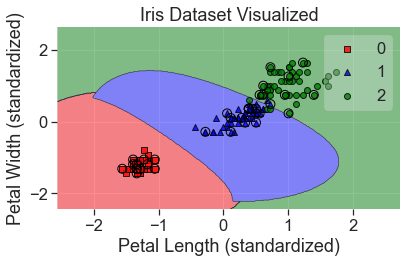 Some other things to keep in mind when using support vector machines:

k-nearest neighbors is another powerful classifier. The concept is simple. At a given point in the dataset, the model finds the \(k\) nearest points and holds a majority-wins vote to determine the label at that point. The point is assigned whatever the majority of the \(k\) points closest to them are. It is a different style of classifier, known as a lazy learner. It is called lazy because it doesn’t try to build a function to generalize the data.

One good thing about these is that it is easy to add new data to the model. One downside is that it can have trouble scaling to very large datasets, because it never learns to generalize about the data. This means it has to remember every data point, which can take a lot of memory. 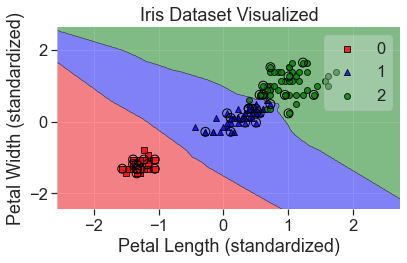 Some things to keep in mind about k-nearest neighbors:

There is another algorithm similar to k-nearest neighbors, but it determines which training samples are most important and discards the other. This gives similar results but requires much less memory. This algorithm is known as learning vector quantization.

The idea of a decision tree is to make a series of decisions that leads to the categorization of the data. Out of all of the machine learning algorithms, a decision tree is probably the most similar to how people actually think, and therefore it’s the easiest for people to understand and visualize decision trees. In this notebook, we’ve been able to visualize different algorithms because we are only looking at two dimensions, but for a decision tree, we can observe every step of how it made its decision.

Decision trees are nondeterministic, so we have to set a random state value to make our results repeatable. 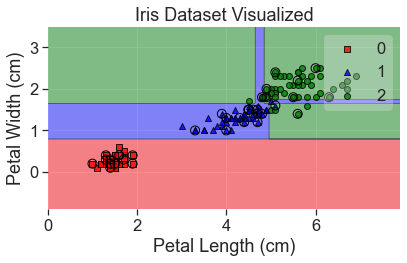 Notice that overfitting has led to a couple of odd decision. This can be fixed by creating a large number of decision trees in what is known as a random forest.

We’ll also try a perceptron. Perceptrons are significant because they are a biologically inspired in that they mirror the way a neuron works. They are the progenitor to much of the other algorithms and caused much of the interest in artificial neural networks. However, they are not actually very good classifiers and only work well in linearly separable cases. A single perceptron isn’t used for modern classification tasks and is only included here because of its historical importance to the field.

The perceptron model is closely related to linear and logistic regression in that it uses the sum of weighted inputs, but it relies on a step function as an activation. 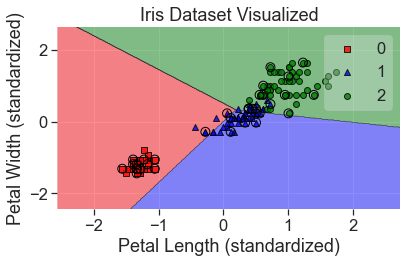 You can see that the model didn’t fit the data very well. There are ways to correct for this but there is no way to correct for non-linearly separable data with a single perceptron. To do that, we’ll use a multi-layer perceptron, also known as a neural network.

A multi-layer perceptron, or, as it is more commonly known, a neural network, is in some ways the king of these algorithms. It is capable of dealing with linear or nonlinear data, of low or high dimensionality. It has an insatiable appetite for data, which makes it very powerful when there is sufficient data to train from. But all this capability has a downside, and that is it is the most computationally expensive to train.

There are many libraries that are specially built to work with neural networks, such as TensorFlow, CNTK, and MXNet. Scikit-learn has a neural network, but it does not work well it large scale productions. Due to the computational requirements, all the best neural network libraries can crunch numbers on a GPU or even a tensor processing unit (TPU). The neural network in Scikit-learn cannot do that, but it will work for our purposes here. 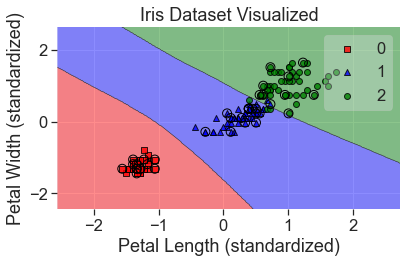 This is another one that can be improved greatly by tuning 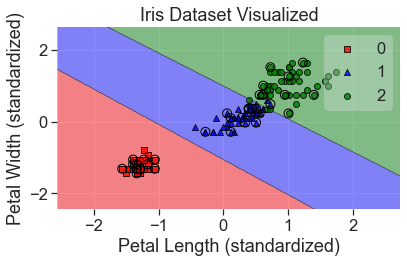 Here’s a case where we went through a big grid search and used a very complex model, but the result doesn’t look that different from a support vector machine. There’s a good lesson here, at least with regard to simple datasets.

Which algorithm is best? We’ll test them all.

The perceptron model will be much worse than the others and it will distort a graph of the results, so I won’t include it.

To get a fair estimate of which is the best model, we’ll break the model into a bunch of testing and training sets, and see which one works best overall. 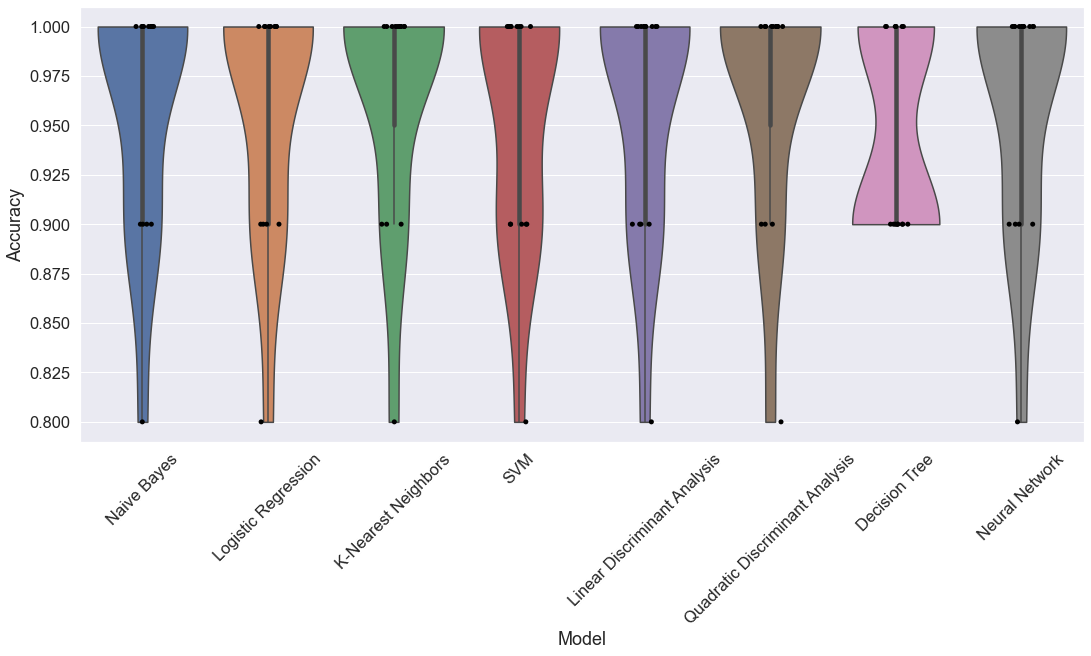