Now that we’ve cleaned and prepared the data, let’s try classifying it using logistic regression. Logistic regression is a popular machine learning algorithm for classification due to its speed and accuracy relative to its simplicity.

Logistic regression is like linear regression in that it tries to find an appropriate way to weigh every input. After multiplying each input by its respective weight, a bias is applied. Then the result is put into a nonlinear activation function and a prediction is made based on the result.

How on Earth could that work? Well, what I’ve described so far would never work, but here is where the machine learning comes in. For our first iteration, we’ll only get about half right (in the case of two possible outputs). But we back propagate the difference between the correct answers and our results through the algorithm to update our weights. Then we’ll make another set of predictions. Then we do it again. And again. Eventually, the weights will become tuned well enough to accurately make predictions. Let’s see how it works.

We could do one vs. many, but we’re not going to. We’re going to skip the instances that don’t contain either introns or extrons. This will simplify things. Let’s see where they are and how they’re distributed in the dataset.

Fortunately, they’re in order at the end, so this makes removing them much faster. We just truncate the array.

We randomly split the data into training and testing sets.

After we have the data the next step is to initialize the parameters we’ll need. We will need a weight parameter for each input and a bias parameter. The easiest way to do this is to initialize them all to zero using np.zeros(). They will become nonzero after the first iteration.

We have to be very careful with our matrix sizes. Let’s look at the shape of the ndarrays.

So weights and bias are both 1-dimensional arrays (n,). When we add anything to them we’ll have to make sure the shape matches.

Now that we’ve initialized our variables, it’s time to make an initial calculation. We’re going to take each input value and multiply it by a weight. Then we’ll sum the weights together and add a bias. The bias term can make one outcome more likely than another, which helps when there is more of one outcome than another (such as cancer vs. not cancer in diagnostic imagery).

Here is how it works mathematically:

Thus we can map any value of x to a value for y between 0 and 1. We can then ask if the result is greater than 0.5. If it is, put it in category 1, if not, category 0. And we’ve got our prediction. The tricky part, however, is to find the correct weights.

Let’s make sure there is a weight for every element in the image. The shapes of the ndarrays must be the same.

Alright, let’s do the actual calculations. Even though the bias is zero for the first iteration we’ll include it here for completeness.

The result is going to be zero because we initialized all the weights to zero. It won’t be zero once we update our weights.

After \(Z\), the sum of the weighted input (image_sum in the code), has been determined, we need to convert that value into a class. The trick is to use an activation function. The term “activation function” comes from neurons with the brain, which will activate if they have sufficient electrical stimulation (roughly speaking). For our purposes, the activation function is going to translate \(Z\), which can be \(-\infty\) to \(\infty\), into a value between 0 and 1.

To do this, we will use a sigmoid function.

They create an S-shaped curve. 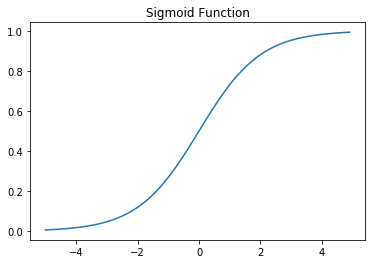 In some notations, the output is written as A or y-hat. In our case, we’ll just call it output.

Side note: Numpy uses the IEEE 754 standard for rounding, which states that values halfway between two numbers (e.g. 0.5, 1.5) should be rounded towards the even number. Thus 0.5 will be rounded to 0. Here’s a quick demo:

Back to logistic regression. Now we make the predictions.

Let’s compare our prediction with the true value.

It doesn’t particularly matter whether our prediction was accurate or not. We’re actually comparing the output against the correct answer and not the y_prediction. We do this because if the output was, say, 0.51, it would round to 1. This may be correct, but the fact that the model thought that was only a 0.51 and not 1.0 or at least > 0.90 shows that it still needs to be trained.

Now we’ll use the error to update our weights in a process known as back propagation.

To refine the weights, we have to find what guesses were wrong and impose a cost for those errors. There are lots of functions, known as either loss functions or cost functions, that could do this. For example, we could use squared error (also known as L2 loss), which looks like this:

This loss function looks more complex than it is. Because the value of y is either a 0 or 1, one of the two terms will disappear. This function is equivalent to saying:

OK, let’s see what our loss is.

But the total amount of loss isn’t particularly useful unless we know how much of it to attribute to the bias and to the respective weights. To find that, we’ll look at how the cost function varies with changes in the weight and the bias. That is, we’ll have to calculate the partial derivative of the cost function with respect to these variables.

Something interesting to note: By multiplying by the input size as well, we change the weights more for inputs that had high values, so the algorithm automatically finds the most significant weights and changes them.

Similarly, for the bias we have:

We don’t want our weights to swing widely each time we get a new value, so we’ll introduce a small learning rate that we can use to reduce the step size. If the step size is too large, we won’t be able to find the minimum.

Now we continue to do that for every weight in our algorithm.

Obviously, doing this one by one isn’t a good idea, so we’ll write a loop that goes through all the samples.

So let’s reset the weights then do them all at the same time.

We’ll start over again with a new set of weights and a bias.

Now use the vectorization in numpy to calculate the output for every single instance.

Because all of our weights were the same, all the results will be the same. This will change after we’ve backwards propagated through the algorithm once.

To find the total cost, we have to sum through all cases and then divide by the number of cases.

However, instead of summing through each instance, we’re going to calculate these as vectors:

We’ll record the total cost because we should see it decrease over training epochs. But again it’s actually not the number that we’ll mostly be dealing with. It’s the partial derivatives that we’re interested in. We’ll calculate them again.

Note that depending on the shape of the matrices, it may be necessary to transform some of them before you can take their dot product.

And we do the same for the bias

As you can see, even the the weights all started the same, because of the variation in the input the resulting changes to the weights differ. This means once we update the weights they will be different.

OK, now we have a cost associated with every weight. Let’s do the same for the bias.

OK, now we have our gradients. Let’s update the weight and bias.

Cool. Now we’ve been through an entire forward and backward propagation of a logistic regression model. The weights are still very untrained, so we’ll have to go through many epochs to refine them. Let’s build a function to do that.

Now that we’ve trained all the weights, let’s make predictions against the test set.

And that’s how logistic regression works!

DNA Splice Junctions I: Cleaning and Preparing the Data